I’ve posted the source code for my presentation LaTeX: More Than Just Academic Papers and Theses as an example on Overleaf.

(Yes it’s been a while. I’ve started working and adapting to the new pace!)

So quite a (long) while ago, I posted my sample beamer poster, while preparing for a conference poster. Now I’ve got another poster to present, and the previous colour schemes just did not go well with the logos. Hence I started tinkering around with the colours, and finally settled on this light, subtle palette:

The sample poster looks like these (shown together with the existing two other colour themes):

And here’s a thumbnail of the actual poster:

Source code of the sample files (including Beamer themes and colours) can be downloaded here.

My research area is on malware detection, so I usually follow the Giraffe Chapter talks and their slides.

I personally met the speaker when he came to KL in 2009, but of course the discussion was not whether he’s using Beamer or not. It’s just a tool 🙂

If you don’t have Keynote in your Mac, or does not even own any Apple’s hardware, perhaps considering this theme, click here

I have created a beamer themes which depends on Ubuntu font.
Get it from here:
https://github.com/raden/beamer-ampang

On Linux or if you have Cygwin

Notice how the heights of the headline and footline coloured boxes are almost zero. The same thing happens to the itemized and enumerated list markers, too.

A bug report has been filed with the LinuxLibertine project, but it’s still open at the time of writing.

In the meantime, Ulrike Fischer and Robin Fairbairns have provided an interim solution by resetting the ex value in the .fd files. Here’s what I did following their suggestions.

Locate the Biolinum .fd files, which should be in $TEXMF/tex/latex/libertine/ . I usually work with T1 encoding, so I homed in on the files t1fxb.fd, t1fxbf.fd, t1fxbj.fd, t1fxbjo.fd and t1fxbo.fd. (All these files, because sometimes I want the old-style numbers fonts.) I then added the code in red below for each m-n series-shapes:

I didn’t bother with the \DeclareFontShape of other series-shapes, as the above seems to have fixed the problem for me:

So hopefully this’ll help anyone else who’s run into a similar predicament. Thanks again to Ulrike and Robin for the solution.

And here’s Cyberjaya, a Beamer theme based on Multimedia University’s (MMU) colours. (Cyberjaya, Selangor, Malaysia is where MMU’s main campus is located.) 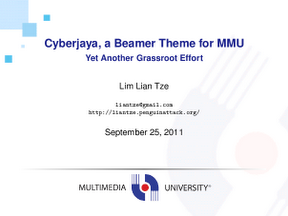 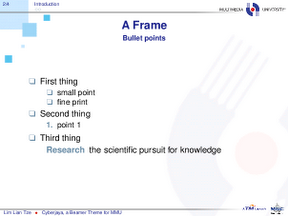 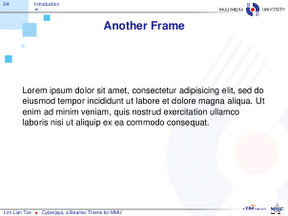 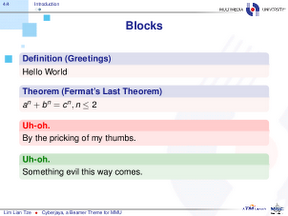 Just last week, I had another Beamer-related inquiry from a postdoctoral fellow at the School of Mathematical Sciences, Universiti Sain Malaysia (USM). Was it possible to have a Beamer theme modelled after USM’s Powerpoint template?

I came up with Gelugor over the weekend. (Gelugor, Penang, Malaysia is the town where USM’s main campus is located.) 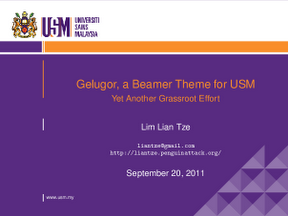 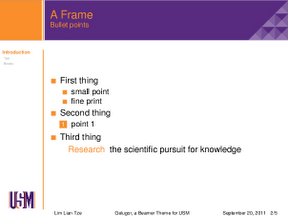 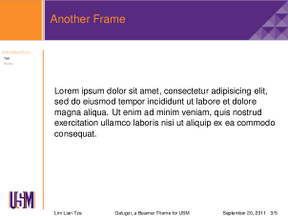 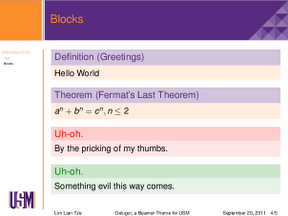 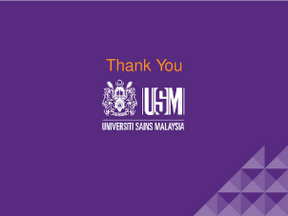 This all started a couple of months back when Najmi asked me if it was possible to get a Beamer presentation to look like his university’s (Universiti Teknologi Malaysia, UTM) Powerpoint template.

The eventual result is Skudai, a UTM Beamer theme. (Skudai is the name of the city town in Johor, Malaysia, where UTM’s main campus is located.) 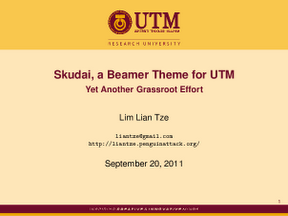 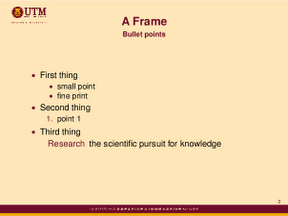 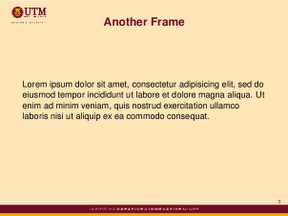 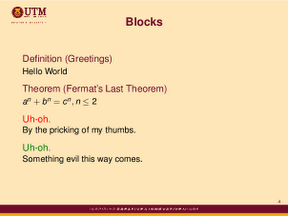 A brief example on using the theme:

Every now and then I’d go wild with \pause and \item in my Beamer presentations, to present information piecewise. (I’m aware that some people disapproves this.) (By the way, the Manhattan theme is a Keynote lookalike.)

For archival and distribution purposes, I usually invoke

to get a PDF file in which all the overlays are “condensed” to their respective single slides.

When it comes to printing the slides for my own reference, though, I often prefer to have the presentations 4-up on an A4 sheet. In addition, the Manhattan themed presentation isn’t really printer-friendly. So I’d instruct Beamer to only use the Manhattan theme in beamer and trans modes; and that it should use some mostly-white theme as well, as placing the slides 4-up on an A4 paper in handout mode (code lifted from the Beamer manual).

Running pdflatex while activating the handout mode then gives me this output:

Just remember to process your file twice every time you change the mode, so that all hyperlinks and bookmarks are updated properly.